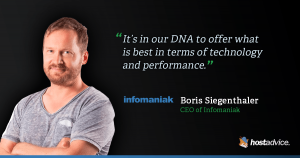 It's always fun to learn about hosting companies from near and far, representing the fibers of the HostAdvice team as well (we, too, are global). Infomaniak is a European-based hosting company that emerged from unconventional roots. The journey has been a profitable one for them, though. Boris Siegenthaler, Infomaniak's CEO, gives us a tell-all about the company, the offerings, and the plans for the future. 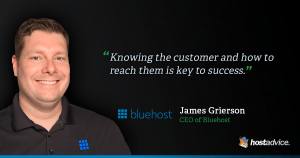 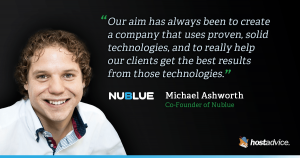 Michael Ashworth's history sort of mimics my own -- except I'm a writer and he's a cofounder of a company that has now been around for more than a decade. His company, Nublue, offers design and development services with web hosting, which is exactly what I was doing when he started his company. But he's continued to be very successful, winning awards and growing his business to 42 employees. Here he is to tell us his tale. 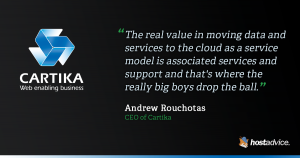 I love hearing stories of people who realized they preferred working for themselves, and even going on soul searching trips to find where to go from here. I also love companies in the hosting space that are especially innovative, who aren't selling the standard shared+reseller+VPS+dedicated hosting packages but who find ways to clearly be differentiating businesses. That's why it was awesome to sit down with Andrew Rouchotas of Cartika who told us all about his journey. 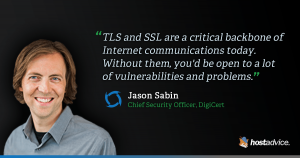 Security is a very important yet often overlooked component to online safety, especially with how easy it is to access sensitive data over bits and bytes and through vulnerabilities that have been exposed through code leaks. Jason Sabin came into his role at DigiCert, a certificate provider offering SSL, TLS, and PKI expertise, through unconventional means, but he's passionate about what he's done. It's been great to learn about his business and DigiCert's core competencies.